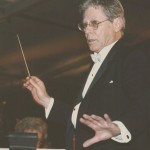 December 7, 2015 is our composer/arranger Marc Fortier’s birthday. Marc is one of Counterpoint’s new composers in 2015. I will let the words of Jeffrey Saultanof, American Historian/Domposer/Arranger/Conductor, expert on many things musical, including composer Robert Farnon, tell you about Marc Fortier, written on his Facebook Page:

Several years ago, Gene Lees made me aware of an arranger/conductor in Canada named Marc Fortier, who was a big Robert Farnon fan. Marc and I quickly became friends, lost touch for awhile, and reunited on Facebook. He is one of the top arranger/conductors in all of Canada, whose concerts are sell-outs wherever he appears. He one of the youngest men I know, but with worlds of experiences. He also has the biggest heart imaginable. I don’t mind saying that we have a mutual admiration society between us, which makes me extraordinarily proud. Today is his birthday, and I hope he has a wonderful one. His music is represented by an excellent rental company/distributor, and anyone who conducts orchestras should check out what they have: www.cpmusiclibrary.ca. The director has the best of Canadian music, right where Marc belongs.

Marc Fortier has put together a wonderful show called Celebration 2017 for Canada’s 150th Birthday. Your orchestra should present it. Listen to samples through this link

Our Summer Highlights issue has an article about this project. See it here.