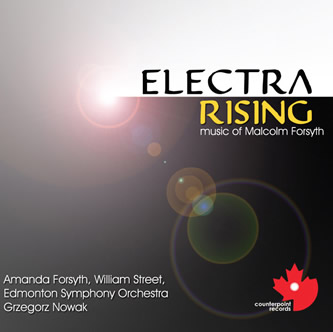 This celebration of the music of Canadian composer MALCOLM FORSYTH (born in Pietermaritzburg, South Africa, 1936) is given over to three of his most vivid scores, composed over a six-year period: the 1989 chamber work Valley of a Thousand Hills; and two concertos – the 1992 Tre Vie (Three Roads), for alto saxophone and symphony orchestra, and the 1995 Electra Rising, for cello and chamber orchestra. While differing in character, the three works demonstrate in common Forsyth’s mature resourcefulness as a weaver of distinctive orchestral fabrics. Forsyth’s experience in the 1960’s as a trombonist in the Capetown Symphony Orchestra, while at the same time writing orchestrations for the South African Broadcasting Corporation, gave him a keen sense, which has never left him, of what may be done with an orchestra. Since moving to Canada in 1968, he has expanded and refined that sense of the orchestra in a long succession of instrumental pieces, including an almost Hindemithian array of work for solo instrument and orchestra (eleven, I believe, including the two concertos on the recording). In the cello concerto for his daughter, Amanda, Forsyth’s solo writing has also reached new levels of insight and authority.

Such a concerto has been dreamt of by father and daughter almost from the time she began cello lessons, and over the years a number of smaller works dotted the path to the fulfillment of that dream. Among these were Eight Duets for Young Cellists, which Forsyth designed for Amanda when she was six, ‘to defeat the impediment of mixed meters before it loomed too large.’ Another of the stations along the path to a concerto was the Eclectic Suite, (subtitled punningly, Pop’s Cycle) which Forsyth gave her in 1984 around the time of her 18th birthday. Ten years later, by which time Amanda had become a virtuoso of her instrument and more than ready for a concerto of her own, her father serendipitously received a commission from the CBC Vancouver Orchestra and the Calgary Philharmonic Orchestra to compose just such a work for his daughter.

In 1995, the dream became a reality when, under Mario Bernardi, Amanda played the premiere of Electra Rising at a Calgary concert and the broadcast premiere from the CBC’s Studio One in Vancouver.

Concerning the provocative title of the concerto – Electra Rising – Forsyth has warned us against probing it for Graeco-Freudian connotations. He says he was invoking the Agamemnon/Electra, father/daughter relationship as a symbol of the close musical relationship that has always existed between himself and Amanda.

Electra Rising is in four connected movements. The opening movement, which Forsyth calles “Cadenza”, begins with touching lyricism. The cello sings a long, eloquent melody over a subtle web woven by strings and harp, with – in the composer’s words – occasional ‘woodwind showers.’

Like a briskly ticking clock, xylophone strokes take us into the second movement – an exuberant scherzo with the title Mayibuye Afrika! (Let Africa Return!). This movement, says Forsyth, ‘recalls the land of both father’s and daughter’s birth in a moment of liberation.’ The third movement is another Forsythian ‘Cadenza’, again lightly scored for the orchestra, this time setting in sharp profile the soloist’s dramatic Orphean apostrophe of chords – bowed, stroked and plucked.

The final movement – Paean – is, writes Forsyth ‘an eposition of the radiant singing sound of the romantic cello … The motto-theme of the first cadenza is recalled in a phantom procession, preceding a descent into tumbling arpeggios and a final bravura, with the soloist encompassing the total range of her instrument in rocketing outbursts.

Electra Rising may fairly claim to be Forsyth’s most imposing work to date, both for the vitality and scope of its instrumental detail and for the heartfelt eloquence of its utterance.

Valley of a Thousand Hills plucks from the composer’s memory three landscapes of the area to the east of his birthplace in South Africa. Zulu clans live there with their herds of cattle. Forsyth’s first sight of the place – gazing with the eyes of a child into the morning sun – conjured, he says, ‘magical and romantic visions which have lasted into adulthood.’ 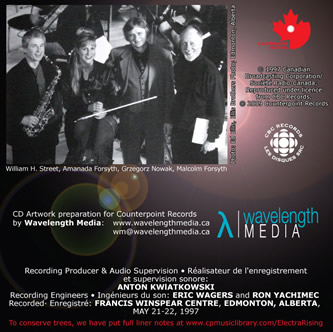 The opening movement – Horizons – was inspired by ‘the myriad hills floating in the morning mists.’ Fragments of melody and rhythm ‘grow, change and are subsumed …’ The second movement – Mkambathini – takes its title from the Zulu name for the mysterious flat-topped Table Mountain that rests on the horizon. The third movement – Village Dance – provides Forsyth with an opportunity to play with the asymmetrical meters (in this case, 17 eighth notes to the bar) and cross rhythms he so enjoys.

Valley of a Thousand Hills is transparently scored: pairs of oboes, horns and bassoons, a single percussion and strings. The work had its premiere in 1989 at the Guelph Spring Festival. Simon Streatfeild conducted the Manitoba Chamber Orchestra.

Tre Vie (Three Roads) was commissioned by the Canadian saxophonist William Street to play at the International Saxophone Congress in Pesaro, Italy, in 1992. The Italian title and its associations were the composer’s response to the occasion and venue of that premiere. The first, third and fourth movements represent the Tre Vie – the three roads of the title: the Appian Way, the Flaminian, and the Salarian Way. These are the ancient roads which led out of Rome. The Salarian Way was so named because, along it, salt supplies were carried from Pesaro to Rome.

The second movement – Ommaggio à Messiaen – is something of a cuckoo in this nest of old Roman roads. Forsyth was composing the work when, in May 1992, Olivier Messiaen, the great French composer and teacher, died. Forsyth paid hommage to Messiaen’s international influence on the young composers of his time by inserting this movement. It is a series of free melismas – Forsyth calls them ‘cadenzas’ – by the soloist against an unmetered orchestral background. In spite of the symphonic size of his orchestra in this concerto, Forsyth uses it with a light hand.

The opening movement recalls the Mediterranean style of William Walton in his Violin Concerto, with its buoyant intricacy, warmly yet delicately coloured. The third movement (prefaced by the Messiaen hommage) again nudges at a memory of Walton, even in its title (Melancolio) which echoes the instruction at the beginning of the third movement of Walton’s First Symphony (‘Andante, con malinconia’). But Forsyth’s melancholy is less highly charged than Walton’s, less neurotic, a simpler sadness, achieved, as he points out, by ‘two melodic lines against two identical chords, a semitone apart, which alternate in four-bar sequences.”

The final movement, almost as brief but not so simple, is a rondo, pitting more of the soloist’s prowess against more of the orchestra’s. – Kenneth Winters

This recording marks a first for the Edmonton Symphony Orchestra – it is the ESO’s first recording (and indeed the first performance) in the newly constructed FRANCIS WINSPEAR CENTRE FOR MUSIC. Located in the heart of Edmonton’s downtown, Winspear Centre is designed to accommodate all musical styles: pop, folk, country, classical, jazz, choral and opera. The 1,800 seat venue allows music to be performed with or without sound reinforcement. The “shoebox” shaped performance chamber was designed by the world’s foremost acoustical consulting firm Artec Consultants of New York.

Winspear Centre officially opened in September 1997, and is operated by the Edmonton Concert Hall Foundation, a not-for-profit organization. The design and construction of the hall was undertaken by a team of Edmonton-based companies, and was supported by private donations and grants. It is named for Dr. Francis Winspear, O.C., (l903-1997) an Edmonton businessman and philanthropist who pledged $6 million to the project in 1988 – at the time the largest private donation ever made to a cultural facility in Canada. 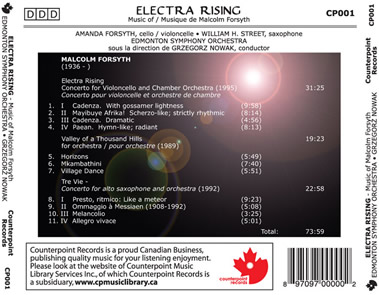 Canadian artist AMANDA FORSYTH is rapidly escalating into prominence as one of North America’s most accomplished cellists. She is an artist of boundless versatility with a repertoire covering all musical ages and genres. A graduate of the Juilliard School of Music in New York, Amanda Forsyth studied with the renowned pedagogue Harvey Shapiro and was also a protege of British cellist William Pleeth. She performed two seasons with the Toronto Symphony Orchestra before being appointed principal cellist of the Calgary Philharmonic Orchestra by the respected conductor Mario Bernardi.

Miss Forsyth has performed Schumann’s Cello Concerto, Andrew Lloyd Webber’s Variations for Cello and Orchestra, Shostakovich’s Concerto No. 1 in E Flat, and Don Quixote by Richard Strauss, both in concen and in national broadcasts over the CBC networks. As a recording artist she appears on the Marquis, Fanfare, Pro Arte and CBC Records labels.

Amanda Forsyth has performed as a soloist and chamber musician in North America, Europe, Asia and Australia with world renowned artists such as Pierre Boulez and Stephen Hough. In addition to teaching cello at the University of Calgary’s Faculty of Music, she is a member of that university’s string quartet. Her busy touring and performing schedule includes concerts with her acclaimed Chinook Trio, and as a member of Calgary’s Aubade Ensemble.

WILLIAM H. STREET has earned worldwide respect as one of Canada’s finest instrumentalists. He holds a doctorate from Northwestern University and was a student of Frederick Hemke and Jean-Marie Londeix. He has been the recipient of many awards, not the least being the Certificat d’Aptitude de Saxophone, France’s highest recognition for excellence in music performance and pedagogy. He was elected President of the North American Saxophone Alliance in 1991 and is a member of the international committee of the World Saxophone Alliance.

As a recitalist and orchestral soloist, William Street has appeared throughout Asia, Europe, Central and North America. He is also in great demand as a chamber musician and has performed with such ensembles as the Twentieth Century Consort and the Chicago Saxophone Quartet. His concerts have frequently been broadcast on the CBC and he can be heard on several CD recordings.

William Street resides in Edmonton and teaches at the University of Alberta. His strong interest in music education prompts him to appear frequently as an adjudicator and clinician throughout North America and Europe.

The EDMONTON SYMPHONY ORCHESTRA is comprised of 56 full-time professional musicians. The ESO musicians take an active role in the musical community in Edmonton and elsewhere as performers, teachers, clinicians and recording artists. The ensemble of the present day was founded, after several forerunners, in 1952, and it has grown to become one of Canada’s ten major orchestras. Among the orchestra’s many recordings for the CBC are Russian Sketches (SMCD 5169), and two discs with great Canadian singers, Louis Quilico and Ermanno Mauro. The ESO has also contributed recordings of Britten and Willan (SMCD 5123), concerti with cellist Shauna Rolston (SMCD 5105), and a compilation of Great Orchestral Marches (SMCD 5093).

Born in Poland, GRZEGORZ NOWAK studied conducting, violin and composition at the Poznan Academy of Music. He continued his studies in the United States, at the Eastman School of Music and at Tanglewood, with such distinguished conductors as Leonard Bernstein, Seiji Ozawa, Igor Markevitch and Erich Leinsdorf. He became the youngest Music Director of a professional orchestra in his native Poland during his tenure with the Slupsk Symphony Orchestra.